How I Got my Son to *Want* to Practice Piano 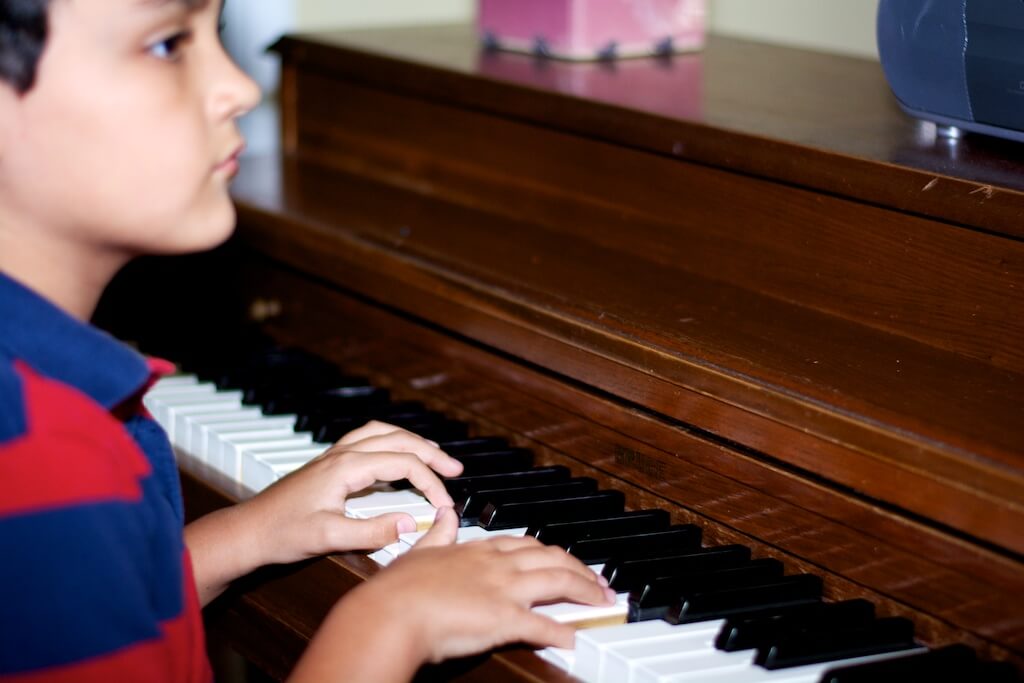 If your child is learning piano, or any other musical instrument, chances are you’ve gone through those phases when he’s just not too keen on practicing.   In the beginning of our MusicTime keyboard class at the University of Miami, 2 years ago, Super Hero showed quite the enthusiasm for his new lessons. It was a novel thing for him, I suppose, so he was eager to practice. I used to sit right next to him in front of the piano to practice together. The material was quite short and simple so practicing it was enjoyable and uneventful. Later on, as the musical pieces increased in complexity, practice time became a little more of a “creative” proposition.

Reward or Satisfaction or Both

Since we don’t believe in rewards and punishments at our home, implementing a system such as play this much piano and you will earn this many points, dollars, computer time, or movie tickets, was unlikely. I intended to convey to Super Hero that you practice something because you enjoy it and you derive satisfaction form the sheer learning, conquering, and simply taking pleasure in the doing of it, not because there was a prize attached to it. Such satisfaction is the reward. Otherwise, it defeats the purpose of wanting to learn in the first place.

Nevertheless, I understood it wouldn’t hurt to spice up our daily practice time somehow, so I developed a rudimentary board game. We took turns throwing the dice, getting not only to play the piano following our homework chart, but also dancing and singing to our hearts content, all while gaining or losing turns, and moving forward or backward along the board. It worked like a charm. It made our practice time “game time”!

As the final, and most important concert of his two-year MusicTime career approached, it became more and more significant that all children played well and in harmony with one another. Their instructor was intent on delivering a flawless performance, which, of course, demanded constant and persistent practice at home. We gradually lost sight of our board game to keep up the pace. Every night, either Roberto or me, would usher Super Hero to the piano; and yes, sometimes it took a little more “effort” than others.

Just a few nights before the big concert, there were still a couple of songs, out of the 6, Super Hero hadn’t quite mastered yet. He knew he needed to polish them, but at that point, he wanted to practice as much as a mouse wants to relax near a hungry cat!  I sat and waited for him by the piano. He came, eventually, and asked –“Mamá, do I really have to practice?”. I paused and reflected about how I wanted that moment to unfold before I replied –“You know, I’m gonna leave that up to you”, and I truly meant it.

Of course I wanted him to practice and polish those songs, all the songs. Of course I wanted him to excel at his graduation concert, but I didn’t want to continue in the role of the enforcer. “You know this is your last and final concert in the MusicTime program, this is your graduation concert, so I would imagine you wish to do well” –I continued. “You are the one who chose to learn piano, so it must speak to you somehow.  So, I’m sure you’ll feel very accomplished when you play these songs you’ve been learning all this time.  I imagine you’d wish to feel the satisfaction of having learned what you wanted to learn, and that you want to delight us all with your lovely music.  Don’t you think you will feel happy because you did it!  So really, you’re the one who knows best whether you ought to practice or not.”

I spoke from my heart. It must have touched his heart too because he leaned forward, his eyes all welled up, and hugged me tightly. I kissed him and squeezed him too.  Then he got up and went straight to the piano. His music never sounded more beautiful at that moment. He was playing the piano because he wanted to. I just reminded him of it!

How about you? Do you have any stories about inspiring your children to practicing a musical instrument or a sport? Please share them here with us, we’d love to hear them 🙂